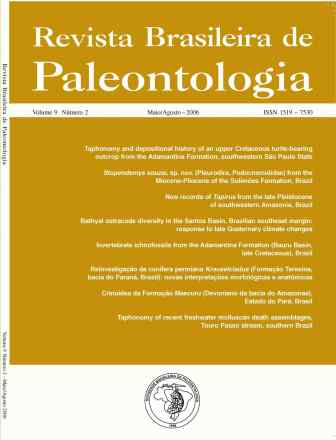 This study provides the first evidence for plantinsect
associations from fossil leaf impressions of the San JosÃ© and
Palo Pintado formations, dated as middle and upper Miocene age,
from northwestern Argentina. The size, shape and arrangement of
leaf damage on several plant hosts consists of various chew marks
made by mandibulate insects occurring along the leaf blades of
Malvaciphyllum quenquiadensis AnzÃ³tegui and Cristalli
(Malvaceae), hole feeding along the leaf edge of Nectandra saltensis
AnzÃ³tegui (Lauraceae), mines within the internal tissues of M.
quenquiadensis, and oviposition scars in Cedrela sp. (Meliaceae).
Based on specific, identifiable features of the plant damage, the
likely producers responsible for this damage include external foliage
feeders such as Orthoptera, Phasmoptera and Coleoptera; leaf
miners from the Lepidoptera but possibly Hymenoptera and
Diptera; and ovipositing insects representing the Odonata. Many
of these insect groups were previously known from earlier Paleogene
deposits of Argentina, and similar ovipositional damage has been
documented from the early Eocene of Rio Negro and middle Eocene
of Chubut in Patagonia, indicating geochronological continuity and
occurrence in marsh and open woodland plant communities under
warm and seasonal climatic conditions.