Identification of bacterial multidrug resistance in wounds of pets 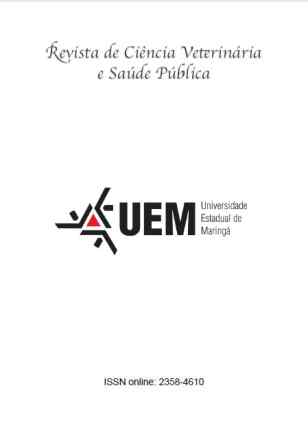 Identification of bacterial multidrug resistance in wounds of pets

The objective of this study was to identify the bacteria present in wounds of dogs and cats, monitor the resistance profile of the main groups of antimicrobials and identify multidrug-resistant strains of interest in public health. 54 bacterial isolates from 38 wounds were evaluated in 48 dogs and 6 cats from the Veterinary Hospital (HV) of the State University of MaringÃ¡ (UEM), Umuarama Regional Campus (CAU) from March 2012 until February 2014. The evaluation of the isolates, performed in the Laboratory of Veterinary Microbiology of HV-UEM-CAU, consisted of bacterial identification by morpho-tinturials and biochemical characteristics, antimicrobial susceptibility by disk diffusion method with 32 antimicrobial and phenotypic research of MRS, MRS-MLSB, ESBL and VRE strains. Multiple antimicrobial resistance (MAR) was calculated by the MAR index. The results were submitted to descriptive analysis in order to calculate the absolute and relative frequencies. 55.5% (30/54) of the strains tested were identified as gram-positive cocci, 35.2% (19/54) as fermenting gram-negative bacilli and 9.3% (5/54) as non-fermenters. The highest prevalence of strains identified was Staphlococcus spp. (48.1%), followed by Escherichia coli (11.1%), Citrobacter spp. (7.4%), Pseudomonas spp. (7.4%) and Providencia spp. (5.5%), others were found in small percentages. A total of 1433 reviews of antimicrobial drugs were conducted where the percentage of drug resistance in vitro considered by CLSI was 42.3 % (n=606) and with intermediate resistance was 7.4% (n=106), totaling 49.7% (n=712) rating with partial or total resistance. The average MAR index was 0.42, where 83.3% (45/54) of the isolates were multiresistant (â‰¥ 0.2). The drugs regarded as the most susceptible to resistance were penicillin (R=87.5%), ampicillin (R=79.2%), amoxicillin (R=71.7%), clindamycin (R=80%), oxacillin (R=63 %) (only tested in Gram-positives), cefoxitin (R=63.3%), tetracycline (R=61%), erythromycin (R=61%) and rifampin (R=52%). Drugs considered to be less susceptible to bacteria resistance were imipenem (R=0%), meropenem (R=4.5%), polymyxin (R=9.5%) (only tested in Gram-negative), gentamicin (R=17%), tobramycin (R=19%), amikacin (R=21%) and neomycin (R=26%). There were found 16 samples phenotypically characterized as MRS, 12 as MRS-MLSB, one as VRE and 5 as ESBL strains.